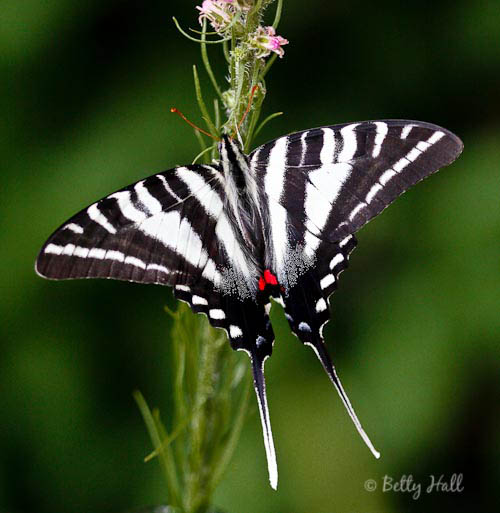 The Zebra swallowtail is one of my favorite butterflies. I’ve often seen this butterfly while hiking woodland streams and watching for spring wildflowers. And I have seen it in our Lexington, Kentucky, backyard twice in the last two years. This photograph is special to me, because the butterfly is one I raised, and it was made shortly after the butterfly emerged from its chrysalis.

This is the zebra swallowtail caterpillar, which my friend, Connie brought to me. At this stage it is about one-half inch long and feeding on paw-paw leaves, the only leaves it will eat.

One week later it was about one inch long, and it then made this chrysalis.

Two weeks later it emerged from its chrysalis at the left of this image and became a mature buttefly. After a couple of hours, it’s wings were hardened,  it took flight and was gone. I’m ever amazed at the wonders of nature,  which certainly include the life cycles of butterflies and I thoroughly enjoyed observing this one.