Harry and I recently hiked to the Rock Garden, one of our favorite spots at Natural Bridge State Park. Among other things we enjoyed seeing a Six-spotted Tiger Beetle (Cicindela sexguttata). It doesn’t look at all like a tiger – the name refers to the fact that they hunt other insects. 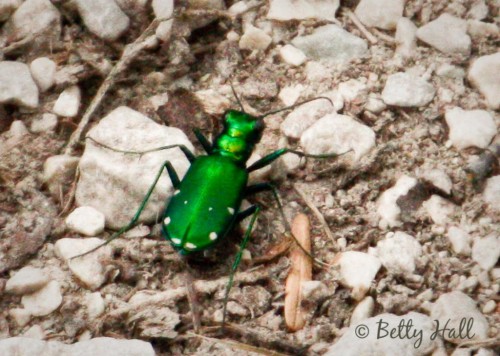 This one was half an inch long and a beautiful metallic green. It was easy to see when it was on the trail, but I lost sight of it when it flew to nearby greenery. This was the first one I’ve ever seen, although they are apparently fairly common to the eastern United States.

Once we got to the Rock Garden I was delighted to see a number of spring wildflowers. The Purple Phacelia (Phacelia bipinnatifida) was especially striking. The abundant bright-purple blossoms contrasted with the green foliage and the huge moss-covered boulders.

It was a beautiful setting and a lovely day to be in the woods. These two finds and other spring wildflowers were more than enough to fill my cup.

Note: Thanks for the comments on last week’s Red Admiral blog post. I was especially interested to hear of the Red Admiral sightings in northern Illinois and southern Ontario.