Greater Sandhill Cranes (Grus canadensis tabida) spend the winter in Florida, Tennessee and Georgia. Some of them stop in Kentucky each January and February as they head north to their breeding grounds in Minnesota, Wisconsin, Canada, and Alaska. Park officials estimated the current population at 4,600 birds.

We started the sunrise tour at 6 a.m. and drove near mud flats where the cranes roost. At first we could only hear their distinctive calls. With daylight began to see flock after flock leave the roost to feed. During the day we traveled backroads to see many birds in nearby fields. 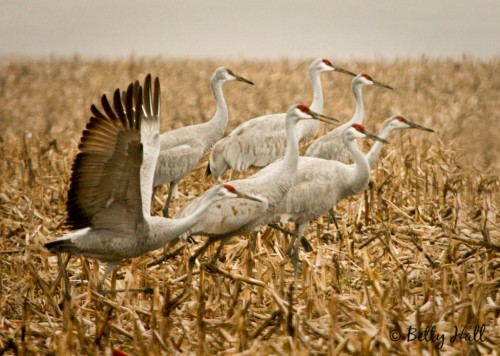 The cranes are extremely wary and quick to take flight, so it wasn’t easy to get close to them. I captured all of these photos with a 100-400 mm camera lens that I rented from Murphy’s Camera. 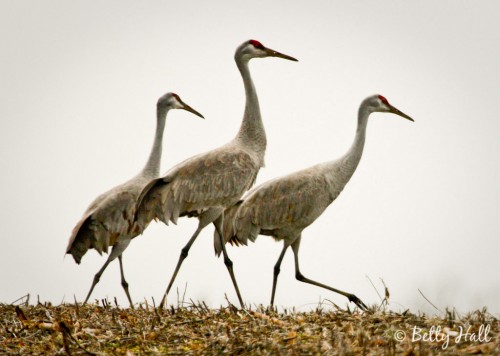 It was a special treat to see them jump and “dance.” Were they practicing for courtship or possibly jumping for joy?

Finding cranes on our own would have been tricky and we are glad we did the tour. Park officials know the habits of the cranes and where to find them. If you are interested, there is another Sandhill Crane Weekend February 17-18, when the bird population is expected to reach about 12,000. Preregistration is required.

It was a fun weekend and I’m grateful to have seen and heard these awesome birds relatively close to home.

20 thoughts on “Sandhill Cranes in Kentucky”